The 79th store of Krispy Kreme in the Philippines opened on July 22, 2016 at SM City Baguio during its 75th founding anniversary; the second store in Baguio City. 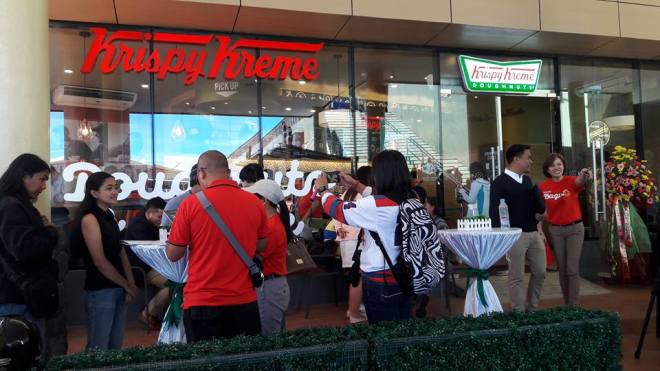 Watch the highlights below:

Summer’s officially over since two weeks ago but that doesn’t mean you can no longer go around Baguio and have some fun. In fact, Baguio has a more interesting feel when it’s rainy. As proof, Azalea Hotels and Residences invited several bloggers from Manila and a couple from Baguio (I was one of them!) for an After Summer Getaway to showcase what this cool city has to offer during monsoon season.

They arranged tours for us bloggers in places typical Baguio tourists usually don’t go to and of course, there were a lot of food trips as well! What is a Baguio tour without food, diba?

Now this article’s gonna be written in three parts for an easy read. I’m gonna begin with the places we ate at outside of Azalea.

On the first night of the event, the staff organized a dinner and acquaintance party at Cafe Yagam where we ate a Cordillera-themed meal. The place is a house-turned-cafe that had homey vibe. They had a menu on the wall written with chalk. The prices were reasonable and you kinda get a hint that the place served great food. There were several other guests in the area who were jamming while having beer;  They had a lit fire place and above it was a load of books anyone was free to browse. Unlike most food places, Cafe Yagam had a variety of seating arrangements ranging from typical tables and chairs to cushions on the floor around a low-rise table.
The owner of the place gave us a quick introduction why they were serving the particular dishes they prepared that night and also explained the traditional context of the food.

She first introduced Pinkipikan — a meal prepared by beating a chicken with a stick to make its blood clot near the surface of its skin, making its meat tastier. It is then smoked and served together with sayote and soup (which you can add rice wine to if you liked).

Traditionally served to visitors to a Cordilleran family’s household.

The meat of the pinikpikan was indeed tasty. It reminded me of tinola only its meat was firmer. The sayote was fresh and the soup was brothy and light; I tried it with a bit of local rice wine but I didn’t like how it tasted. Maybe there was a particular proportion of rice wine to soup that I wasn’t aware of.

The second dish was called Pinuneg or blood sausage. This dish is exclusive to the Benguet Kankanaey and is typically served when a pig was butchered during a ritual or ceremony.

This kind of sausage is made to avoid wasting any part of the animal.

The sausage had chunky bits inside of it. As a fan of dinuguan, I enjoyed eating this dish. It is paired with a red spicy sauce that is not for the faint of heart. Based on the taste, the sauce had seemed like it had a fermentation stage in the process of making it. It goes well with the sausage but I recommend that you only put a little on it or perhaps use it as a dip instead to avoid overpowering the flavours of the pinuneg.

The third dish introduced to us was called Binungor. It is a Kalinga dish that is served as an appetizer or side dish and not a viand. It is made of various vegetables found around a Kalinga household along with tenga ng daga and other wild mushrooms, and Ot-an, that spiral shaped shell-fish you suck to get the meat inside.

The Binungor had slight hints of sweetness and spiciness to it. I tried sucking on a couple of the Ot-an but I wasn’t successful. 😦 Oh well. The vegetables tasted fresh and were deliciously chewy. I kind of understand why it’s served as a side dish because of it’s consistency. 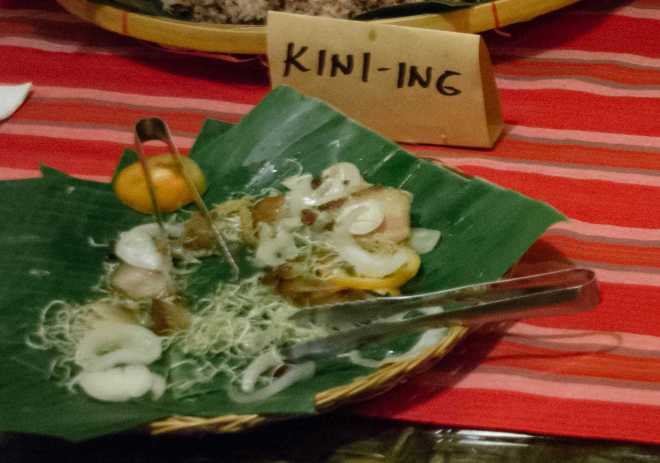 Kini-ing. Or at least what’s left of it. I should remember to photograph food first before eating haha.

The meat was sliced thinly and had a smoky flavor. It was well done but the layer of fat was too thick compared to the portion of actual meat it had. Nevertheless, it was seasoned perfectly. After the concise background on all of the dishes served, we were then allowed to serve ourselves. I had to try everything of course! 😀 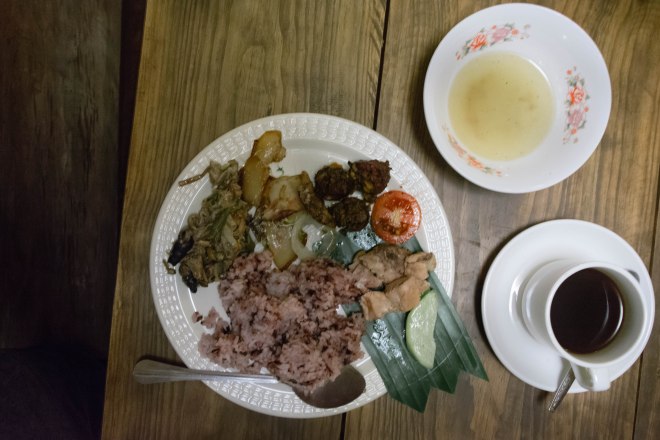 I got a good portion of each of the dishes to fill my plate. Yummy!

I got a cup of fluffy brown rice, a hot bowl of Pinikpikan soup, and a steaming cup of coffee to go with all the dishes. At that moment, everything felt like it was where it’s supposed to be. Each of the dishes complemented each other and combining them with every bite was a fascinating experience for the palate. After the hearty dinner and tummy-warming soup and coffee, we were told that there was still dessert! I felt quite full but I was sure I had room for dinner, because who doesn’t, right?

They served a sticky-rice dish called Kiniwar (hinalo or mixed) which somehow reminded me of Biko, another sweet sticky rice dish. It was still hot but I immediately got a piece before it ran out. Talk about patay-gutom, haha. 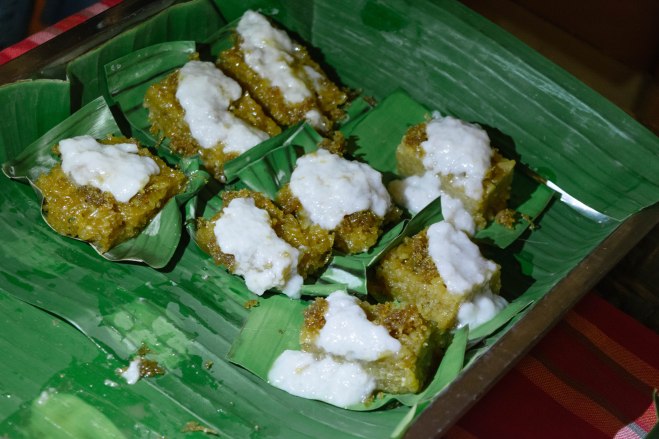 Chewy and sticky and delicious!

The kiniwar was topped with two kinds of coconut: the first one was coconut with gata (coconut milk) cooked to become malapot (thick; viscous) and underneath it was also coconut but was caramelized, kinda like Pangasinan’s bukayo. The coconut toppings made the kiniwar even more delightful for the taste buds. To our luck, they served another freshly-cooked batch! Oh my goodness!

The dessert paired very well with their coffee from Sagada which was smooth and light just like the blues nights the Cafe occasionally hosts. If you enjoy black coffee, this is a must try. It also tastes good with sugar and creamer, if you’re that kind of person. 🙂

This is how black coffee should be.

We played a couple of get-to-know games several minutes after dinner. I had some more coffee while others had tea and before the night ended, they served us Tapuey (rice wine; similar to the one you can mix with the pinikpikan soup) made from Mayuyao, Ifugao. The owner of the cafe told us that tapuey from that particular area had a sweeter flavor compared to other rice wines in the Cordilleras. 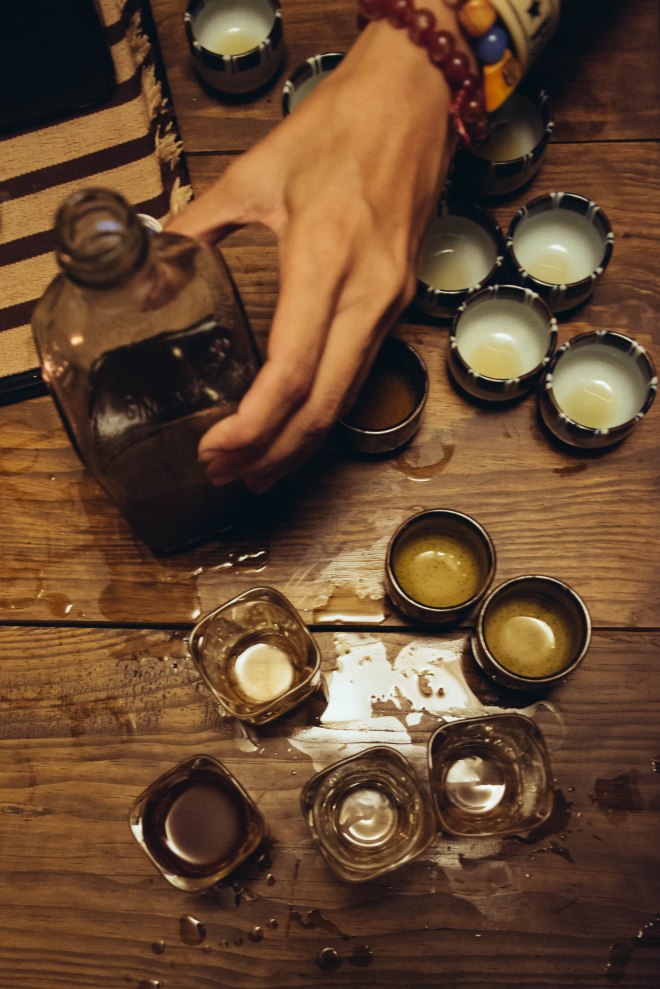 Cafe Yagam’s Tapuey had a smooth texture and had no after-taste unlike most mass-produced alcohol. It was also a great night cap for a tiring and fun evening together with our fellow bloggers. We thanked our hosts and left the place happier and closer to each other. It’s the kind of place I would definitely go back to (alone or with friends) especially on a cold and rainy day.